If you hardly ever forget a face, and have no trouble in instantly spotting a stranger within a dense crowd… maybe you are a super-recognizer!

After the London riots of 2011, police forces retrieved thousands of hours of rough, low quality video from surveillance cameras. Where all failed, a single police constable was able to identify more than 180 riotists - all by himself. New Scotland Yard has found about 150 super-spotters like him, among many thousands of police officers from local stations, who periodically attach to Scotland Yard and help them conduct investigations. So far, their amazing identifications have made it possible to capture murderers, molesters and thieves.

We are all different

In the last 15 years, research in cognitive neuroscience has confirmed that the ability to recognize faces varies greatly from one person to another. In fact, this ability appears to fall along a spectrum, running gradually from extremely poor face recognition (prosopagnosia, also called face blindness) to the outstanding skills of super-recognizers, and distributed as a bell among the population [1]. According to psychologists, this ability appears to be innate, and is mostly not learnable. And although no genetic markers have been linked to it as yet, the skill has been found more similar in identical twins rather than parental twins [2], which starts to evidence its heritability.

We look at faces differently than at other objects. It has been shown that some regions in our brains are exclusively dedicated to face recognition [3,4]. And the talent for face-matching (or lack thereof) also transfers to other face analysis tasks, like emotion recognition or age estimation [5]. For instance, super-recognizers seem to be amazingly skilled at recognizing adult celebrities from their childhood (or even babyhood!) photographs. Does not seem that hard to you? Be our guest and try to identify these celebrities (answers are at the end). 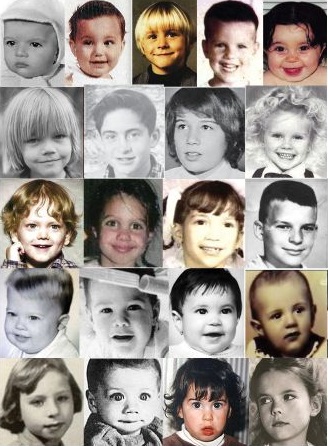 Celebrities when they were babies. Can you identify them?

The whole is greater than the sum of parts

So, what is it that confers super-recognizers this superior ability? It does not seem to be linked to a particularly high IQ, nor an extraordinary memory for objects. But super-recognizers do seem to perceive a face differently. Researchers have studied this with the help of eye-tracking techniques. Eye-trackers are often used in psychometric experiments to learn at which image regions we spend more time looking. During face recognition, regular people focus longer on the eyes region, arguably the most informative part in a face, whereas people with prosopagnosia seem to avoid the eyes and instead concentrate on the mouth. Where do super-recognizers spend more time looking? Surprisingly (or not), the nose.

Why the nose? A large body of research supports the idea that the human visual system does not see the face only as a collection of separable features, but as an integrated perceptual whole [6]. Holistic processing would be crucial for face recognition, and super-recognizers would rely more than others on seeing the face as a whole. That would explain their fixation on the centre of a face, from which a global vision can be more easily captured. It would also explain another interesting fact - upside-down faces.

In a recent study, despite years of experience inspecting passport photos, professional passport officers were no better at matching faces than newbie student participants. They accepted fraudulent photos 14% of the time [7]. However, another recent study concludes that highly-trained forensic experts in face matching do learn specific abilities that are unusual even in natural recognizers, such as identifying faces upside-down [8]. Let the following figure serve as an example. Try to match the frontal face to one of the viewpoints, and you will realize that is much more challenging when upside-down. 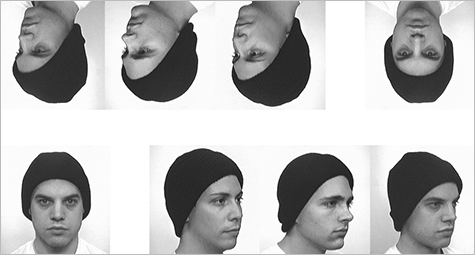 Upside-down matching is harder to most of us. [9]

The reason is that we are unable to perceive inverted faces in a holistic fashion. Apparently, trained forensic examiners learn how to break faces into parts, and carefully match them component-wise. So after all, maybe not everything is in the genes.

Falling at the edges of the spectrum can be challenging. Face-blind people identify their couples, friends or relatives by a checklist of attributes: the length of the hair, the color of the eyes, or that mole next to the mouth. Or their gait, voice or clothing (even their shoes!). A face-blind father reportedly dyed the hair of his son when school started, to be able to recognize him at pick up. And Oliver Sacks, the recently deceased famous neurologist who also suffered this condition, admitted he recognized his best friend Eric by his “heavy eyebrows and thick spectacles”. But problems may arise when that woman next to you at the mall has long blonde hair, red lipstick and a brown jacket - just like your wife’s!

Likewise, super-recognition can become socially crippling. Their abilities are so good, that most of the times super-recognizers keep to themselves that they remember people they saw in the past, in order to avoid awkward situations. Just imagine being introduced to someone who claims to clearly remember your face at the entrance of a cinema, three years ago… Creepy.

Recent studies started to shed light on different types of super-recognizers, which could potentially help improving law enforcement and security. For instance, super-memorizers would have superior facial memory skills; super-spotters could be used in the policing of crowds; and super-matchers could be useful for visa verification or passport control.

While prosopagnosia has long received attention from scientists and media, psychologists began to deepen in the other side of the spectrum just a few years ago. The outcomes of their research will undoubtedly shed light on how and why we can perceive and identify faces efficiently. In the meanwhile, most of us, average face-matchers, are happy to rely on super-recognition tools like BioSurveillance.

Solutions to the baby quizz

Girl in a crowd

If you hardly ever forget a face, and have no trouble in instantly spotting a stranger within a dense crowd… maybe you are a super-recognizer!